Most are quite effective at reducing highway noise, construction noise and many other forms of noise pollution. But depending on their properties, they could be causing more problems than they’re fixing.

This article will discuss the properties that should be considered when shopping for one of these sound barriers, specifically reflective vs. absorptive properties.

Firstly, we would like to say that the best sound barrier has both absorptive and reflective properties.

Many state departments of transportation require STC ratings in the range of 24 to 32.

An NRC rating is between 0 and 1.  If a barrier has an NRC rating of .85, it means that 85% of the sound reaching the barrier is absorbed and 15% is reflected.

A good sound barrier is a sound-absorbing wall with a STC rating of 30 or more and a minimum NRC rating of .85.

When Absorptive Wall Panels are Most Beneficial

In the illustration below you can see that the noise source, represented by a yellow dot, directly affects the house that is level with it and does not affect the house on the hill because the ground absorbs the sound.

In the next illustration we see the addition of a sound barrier that is only reflective.  It does a great job at reducing noise at the lower house.  What happens though, is the house on the hill is suddenly affected when it wasn’t before.

The third illustration shows an absorptive sound barrier in place of the reflective barrier. It both keeps sound from troubling the lower house and absorbs the sound that was being reflected at the house on the hill.

In the illustration on the below, we see two reflective sound barriers with no absorptive qualities.  Not only does the reflection between the two barriers increase noise levels inside, but most of the noise eventually escapes and continues to bother whatever exists outside the barriers. 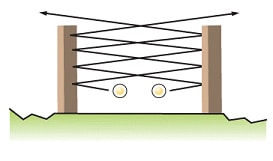 This illustration shows that barriers with absorptive qualities will reduce reflection. This helps with noise levels between as well as outside the barriers.

Diffraction is a characteristic of all wave phenomena including light, water and sound.  It is described as the bending of waves around objects.

Like the way light casts shadows, diffraction causes sound waves to cast “noise shadows” when they strike an object.  Due to their much longer wavelengths, however, “noise shadows” are not very well defined and amount to noise reductions rather than an absence of noise.

Greater angles of diffraction will result in more noise reduction.  The position of the source relative to the top of the barrier determines the extent of the shadow zone and the diffraction angle to the receiver.

As in the two illustrations below, having two reflective walls in place reduces the effectiveness of the first wall. This is because the diffraction angles are altered.  This reduces the “noise shadow.”

Walls with absorptive properties, particularly when there are two, are more effective.

I have a drag strip 300 yards from my house that i’m trying to sell. The last 3 customers said the noise was the problem. Can you give me any advice that I can
put up or he put up to reduce the noise. I would love to talk to you about
your product. Thanks so much!! Todd
501-977-4500