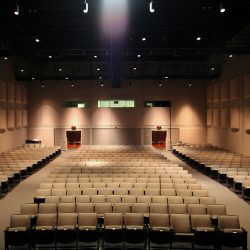 The Patricia Theatre upgrades to a new digital projection system that includes sound absorbing acoustical panels to improve the sound clarity. The Patricia Theatre is one of the oldest running movie theaters British Columbia, Canada. Since 1913, it was also the only way to see new feature films in the small community of Powell River. To continue showing new films, the establishment had to convert to digital and upgrade its sound system this year. This normally costs tens of thousands of dollars. Luckily, the non-profit ‘Friends of the Historic Patricia Theatre’ ran a creative fundraising campaign. They were able to raise the $90,000 that digital projection equipment would cost. But there was one more issue that the staff knew they had to address.

A large portion of the Patricia Theatre’s audience is elderly, and the new digital format does nothing to improve the intelligibility of the films’ audio. This is a problem for some of the most loyal Patricia Theatre patrons who may already have trouble understanding the films.

“One of the things that gets in the way of enjoyment for some people is their own hearing loss due to aging,” said Ann Nelson, who runs the Patricia Theatre with her son Brian.

An anonymous patron who recognized this issue donated funds to have acoustical treatment installed.

Anne called Acoustical Solutions and spoke with Architectural Sales Rep Cory Diggs, who recommended AlphaSorb® Acoustic Panels to be installed around the perimeter of the theater. The panels lower reverberation through sound absorption and greatly improve intelligibility and overall quality of sound.

AlphaSorb® Acoustic Panels are Class 1 Fire Rated and available in one and two-inch thicknesses with NRC ratings up to 1.30. The panels are available in sizes up to 4′ x 10′ and are fabric wrapped with a wide variety of designer line Guilford of Maine patterns from which to choose.

“We’ve already had two severe tests of their effectiveness” said Nelson, “a film last week that presented all of the biggest tests we ever face for comprehension i.e. foreign accents and a mature target audience (Best Exotic Marigold Hotel), and a live band concert with lots of wind instruments yesterday. There was a fantastic response from all audiences – much improved dialogue comprehension with the film and much ‘smoother’ live performance sound.”

The AlphaSorb® Acoustic Panels were made to match the existing walls and are barely noticeable beneath the colorful murals on the side walls. “The panels are really unobtrusive, which is perfect for a heritage building whose ‘character-defining elements’ are so distinctive” said Nelson, “We’re so very happy and ready to talk to anyone who wants to about the experience!”