Mass Loaded Vinyl and the Correct Uses for It 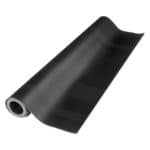 Do a search on Soundproofing in your preferred internet browser and you will likely run across a product called Mass Loaded vinyl, or a number of its brand names. Ours happens to be AudioSeal Sound Barrier and is likely the least expensive out there, incidentally. Many of my prospective customers calling about this product mention that they would like to staple this to their sheetrock and then sheetrock right over it. That should stop the sound, right? Well… yes, but it could have worked so much better had it been allowed to move freely instead of pressed between two layers of sheet rock.

Why is this the case? Yet another analogy for you: If you take a baseball and throw it at a bed sheet hanging from a clothes line, what happens to the ball? In a very short distance the ball loses energy and drops to the ground. The sheet “bled” off the energy by being able to move in 3-Dimensional space. Now, I’m not going to bore you with Newton’s Three Laws of Motion, suffice to say that if the sheet could not move, the ball would bounce, and whatever net energy left in the sheet would result in vibration of the sheet. 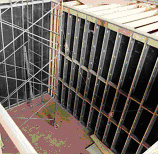 Obviously, the wall can’t be made to be floppy; but the soundproofing inside the wall can be floppy. In the Science of Acoustics, we call it a “Limp Mass Barrier.” This is typically why the Mass Loaded Vinyl is instructed to be installed against the studs and then drywall over it. This allows the barrier to move in 3-Dimensional space and bleed off the energy of the sound, resulting in greater net losses of sound propagation through the wall.

“But I don’t want to rip down my sheet rock to put this stuff up.” That’s fine, no need to, really. The solution here is to find the studs behind the existing sheetrock with a stud finder, mark them with a blue line, and screw in some Furring strips vertically-through the sheetrock – into the studs.

“What’s a Furring strip?” It’s a 1” x 3” piece of wood, kind of like a mini 2′ x 4′. Now, install the Mass Loaded Vinyl (I hope you call us for a quote on the AudioSeal® Sound Barrier, we have some good deals on it) onto the Furring strips, and then sheetrock over the whole thing. Easy-peasy, and you have retained the maximum potential for sound blocking that the product can offer.

So if you want more information on how to soundproof and block sound, you may want to read: