Egg Cartons Get Egg on Their Face in Acoustics Test 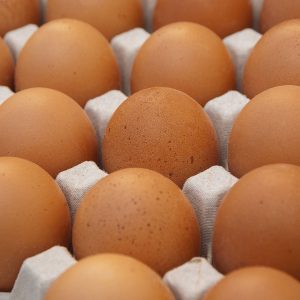 So, if you’ve spend much time at all in the Acoustics Industry, sooner or later you are going to hear this: “Well we could just put some egg cartons on the walls to treat the room.”

Well, you could, but your studio or home theater will look like a recycling center and not actually be acoustically treated very well.

Here is the deal: When absorbing sound, the idea is to have a material that has millions of small “things” in it that will literally move around in 3-dimensional space when a sound wave hits them, thereby changing that wave energy into kinetic energy in the material, which then degrades into heat energy. Or in other words: thick, soft, squishy stuff. True blue acoustical foam is an open cell foam. It contains millions of small bubbles that flex and move with the pressure of the sound wave hitting it. You can’t see this because it’s on a microscopic scale, but that is indeed what is happening.

Egg cartons, recycled cardboard, or Styrofoam (in the old days) is relatively very thin compared to acoustical foam. Now, there is such a thing as “Diaphragmatic Absorption”. That is where you use a thin material that the sound passes through once, hits a wall, and then doesn’t have enough energy to pass back through the diaphragm. My assumption is that this myth got its start because yes, you do have a diaphragm there and an air cavity behind it in the empty egg carton…but there’s just not enough mass there for it to be effective enough to be considered an acoustic material. 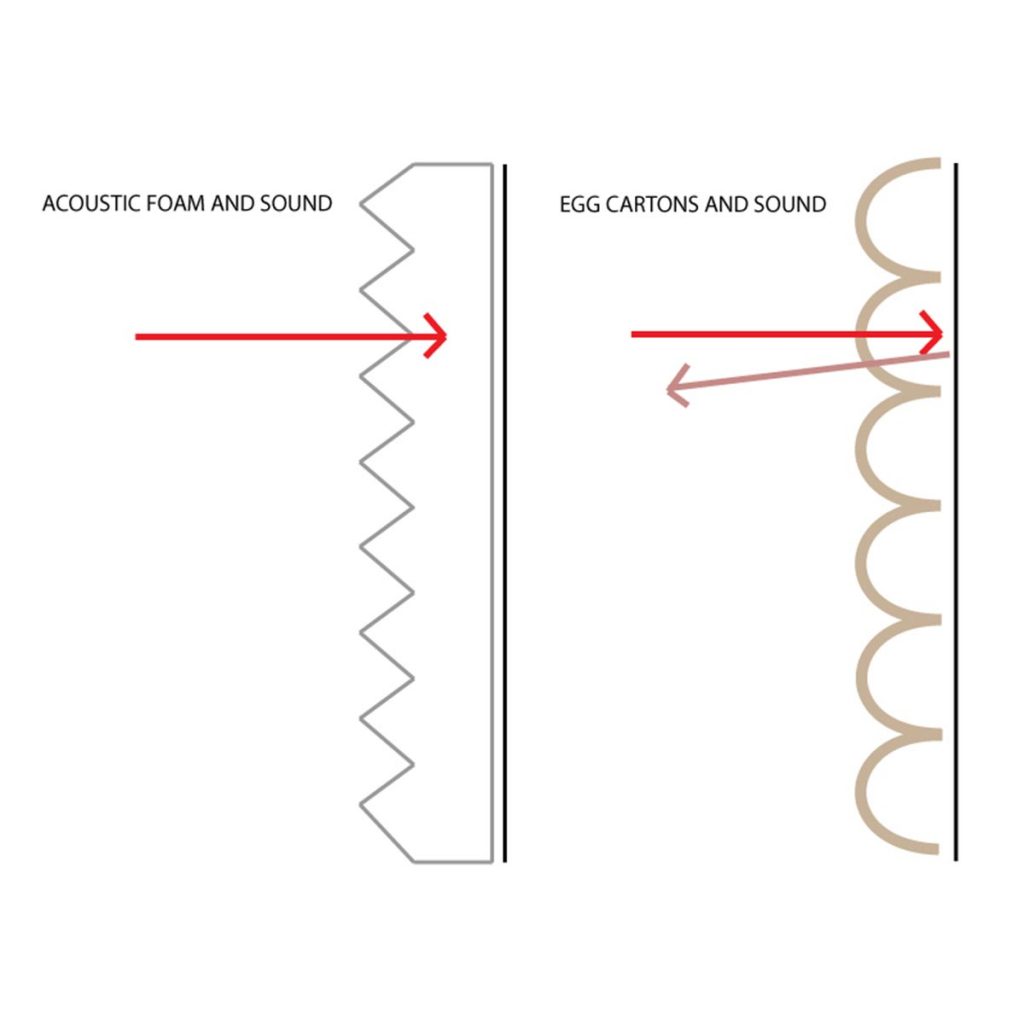 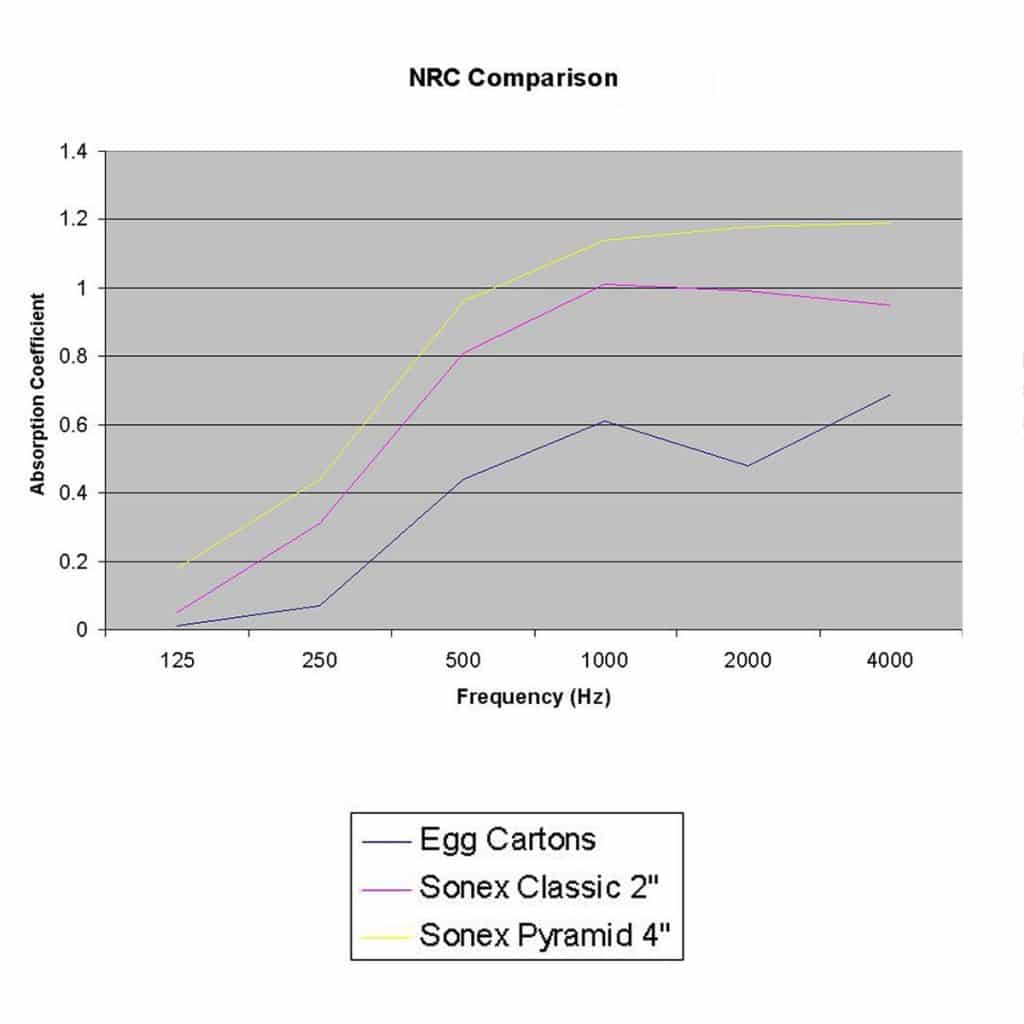 Acoustical Solutions does not approach the science of acoustics as a guessing game. All of our Acoustical Foams have been rigorously tested by nationally accredited and independent testing laboratories. Upon request, we will be happy to provide testing data. In addition, just because of the prevalence of this myth, we actually paid a lab to test Egg Cartons. Click here to see the results.

So, with Easter coming up, we thought we’d say that while we are very environmentally conscious and highly encourage recycling; we strongly recommend that when you are done dyeing eggs, you don’t put the cartons on your walls, choose a high end acoustical foam. 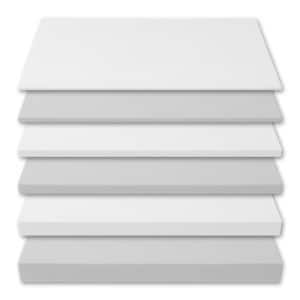 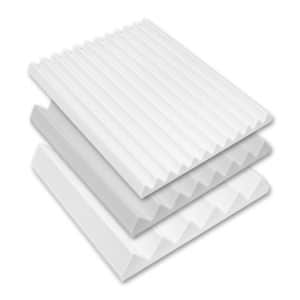 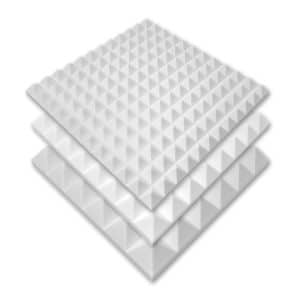 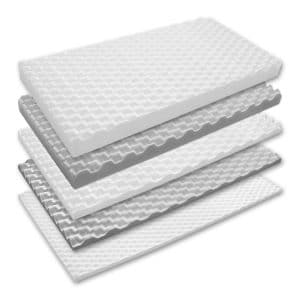 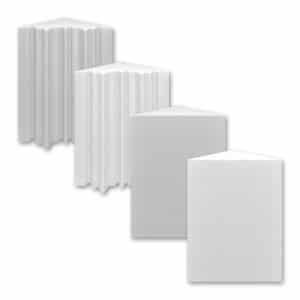 Give us a call if you have any questions about certain applications and I will be more than happy to help you out, thanks!

could we have some improvement from there?

as currently i am working on a school project, teacher wanna see if we could come out with some idea to reduce classroom echo with zero budget, just the echo.

what i am thinking : i understand that egg carton doesn’t work well, what if i cover it the whole egg carton with a piece of cloth? and have some cloth to fill in the egg hole?

scrap cloth is free in my school :p

another thing is the weight, since i could glue it on the wall, other acoustic foam may need drilling to hang on wall?

thanks a lot, truly

how about putting some cloth inside the ‘egg’ hole? :p

As you can see from the test results, egg cartons do absorb SOME sound energy, but it is very minimal compared to acoustic foam.

Hi, I totally understand, and that’s great that you are helping them out. Honestly, you wouldn’t need the Egg Crate at all, the insulation alone would do plenty of absorption, then just put some kind of cheap “breathable” type of fabric over it that would allow sound to pass through but block the insulation fibers from getting out. Use your judgment there, tykek tends to have a bit of a “ting” to it soundwise, reflecting the higher frequencies. It wouldn’t be a perfectly tuned room by any means but would help reduce the echo in the room. Now, if they are trying to BLOCK the sound from going through the walls, we have a problem. Absorption doesn’t mean the same thing as Blocking sound. Absorption is only reducing echo, Blocking means adding layers of mass to the wall and long story short: A budget of Zero wont cut it, just to come out and say it. Blocking sound requires at the very minimum extra layers of sheet rock. If you can get that cheap, then our Green Glue product is a fairly inexpensive best bang per buck way to soundproof: Good luck!

Thanks for the article Matt,
I recently got asked to do a job for a charity. They need sound proofing done to 10-12 rooms. The charity has obviously no money at all. I suggested the oul egg holder trick mainly because there is a budget of 0.
My thoughts were to create a type of diffuser using a layer of insulation, then the egg holders on top of the insulation, with a bit of felt to cover the egg cups. I would attach this to a piece of wooden frame.
I feel its the best idea for cheap. If you have any other suggestions.It would be greatly appreciated.
Thanks,
John

Okay, but I’m in the tropics and industrial products aren’t easy to come by. I have a cinder block generator shed and want to remediate the sound. Wouldn’t egg crate flats do some good?

As you can see from the chart, egg crates do have an absorptive quality, but are just not nearly as effective as actual acoustical foam. If you truly don’t have access to soundproofing material, you can try egg crates to see if they help. Good luck!

We would need to acoustically test the mattress foam in a lab to know the absorption coefficient. I’m sure it’s better than a literal egg carton, but it’s definitely not as dense as melamine foam so not as effective. You can always put it up and see if you hear a difference.

When I first glanced at this article, I thought you were referencing egg crate foam, not cartons. What’s the absorption coefficient of say a egg crate foam mattress? say a 2″ or 4″? I know they aren’t as dense as your product, but what would be the comparison?

OMG are you serious. Egg carton refers to foam panels in a shape they could hold eggs. the nickname is egg carton.

You have a lot of fancy charts and had a well thought out argument.
But who are you arguing with? No moron in the world thought cardboard egg cartons.

Well no one but you.

Yes James, we are serious. In the more than 23 years we have been in the acoustics industry, we have been asked many times about “soundproofing” with literal cardboard egg cartons. These people were not morons, just new to soundproofing and acoustics. The myth that egg cartons soundproof or even provide nominal sound absorption is a myth that has been perpetuated over time.

For example, look at the first link that comes up on Google when you search for “soundproof with egg carton”:
EHow
It reads, “Step 1: Collect many, many egg cartons. Cardboard seems to be the most popular, although foam also works”.

Things like this all over the internet, along with acoustics newbies not understanding product nicknames, lead people to believe actual egg cartons can soundproof.

(We do sell the egg carton foam you were referring to if you’re interested: AlphaWedge Acoustic Foam)