The first, School of Rock in Norfolk, Va., was a project for which we supplied soundproofing and noise control products for practice rooms and a concert venue.

The practice rooms were treated with AlphaSorb® Acoustical Wall Panels to absorb echo and reverberation, which makes it easier to hear aspects of the music that need to be improved upon.

Also used in School of Rock’s practice rooms were acoustic door seal kits and Green Glue.  Each of these products works to eliminate sound transfer so there is no interference with adjacent practice rooms.

School of Rock’s in-house concert venue was also treated with the AlphaSorb® Acoustical Wall Panels.  In a performance space, these panels allow for the spectators to hear sound directly from the PA system, rather than sound that has bounced off two or three walls. 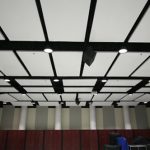 The other music education project we’ve recently completed was for Liberty University’s band.  As the band was moving into a new practice facility, they saw the need for some major acoustical treatment.

Liberty’s new band rehearsal room is almost a perfect rectangle. Before acoustical treatment, all of the surfaces were hard, flat, parallel, and reflective. This all contributed to a 3.5-second reverberation time and an overall bad sound.

We provided AlphaSorb® Acoustical Wall Panels for absorption in the room and AlphaPerf Metal Ceiling Clouds for both absorption and diffusion.

Reaching a balance in absorption was very important for Band Director Dr. Steven Kerr.  The director’s main objective was to create a true rehearsal space, which is acoustically very different from a performance hall.